Although everyone has their favorite stand, they all all shared with no private stands allowed. We have them placed so depending upon the wind direction, everyone has options and also each stand is a safe distance from the others.

Ground Blinds: Currently we use two. One is on the west side of north field 1 and made up from hay bales and a rocking chair. The other is a new location at the intersection of Turkey Trail and Holly Hill Road. It is a portable ground blind. We call that one 4 point.

Box Stands:  We have 6 elevated plywood box stands. All 7-9 feet off the ground. In order to heat them, we have made permanent curtains from surplus military tent fabric. Each side has dual zippers sewn in a diagonal pattern allowing the hunter to open the window just a little or wide open.

the 150’ wide pipeline corridor (called Field #1) for about 200 yds in each direction. Cover is natural

Orchard Stand: This stand covers what we call Field #3, two edges of the young aspen regeneration and two trails (Orchard Road and Avery Ave). There is also a food plot 50 yards to the north of this stand and several to the south.

Buck Stand:  This stand covers a hill side with western and southern exposure of mature red and white oaks, and is a good pinch point between two smaller lakes which a large primary trail called South Main passes through.

Tamarack Stand: Located on a small ridge it has a panoramic view of a recent logging operation in which selected trees were harvested. To it’s back is a three acre tamarack swamp and to its northwest a 80 foot high hill side covered with majestic oaks.

Stinky Stand:  This stand acquired its name because when the property was purchased,  various critters had been inhabiting it. Located in 25 year-old, even-aged aspen and mixed northern hardwoods, it is placed on the highest ridge on the property. With three prominent shooting lanes stretching out 100. This stand also partially covers a aspen clear cut from the January 2018.

Oak Tree: Strategically place in a large oak tree it is the only “Box Stand” not supported independently on 4 x 4 timbers. One of our best stands, it covers the lower half of Field #2 which is native grasses and a food plot, a four acre clear cut of the invasive species (black locust) from last winter, and the east side of a 10 acre plantation which we planted in 2013 with over 5,000 red pine, balsam fir and red oak seedlings.

Platform Stands:  We have 4 of these 8-10 feet in elevation. They all have a carpeted plywood platform which we set a ground blind on about two weeks before opener. It makes for a very easy way to have an enclosed and heat stand.

West Maple Valley:  Covering the intersection of three trails, (West Side, Maple Valley Road and Lone Pine Trail), this stand sits at the west end of an eight year old selective cut with large oaks and maples scattered throughout and a vigorous understory of aspen. To it’s rear lays a three acre pond with a surrounding grassy area. To its north is a south facing hillside covered with mature oaks.

Pretty Pond: Located on the NW corner of the property this stand covers a narrow pinch point on an elevated strip between two ponds. Covered with towering red pines with scattered mature oaks, it is the prettiest stand and ideal for a close shot.

Holly Hill: This platform stand is on top of what we call Holly Hill with a 100 plus yard view in two directions. Two of the three directions were selectively harvested in 2018 removing the over mature aspen while retaining the mature oaks and maple. The third direction overlooks a two acre grassy marsh about 40 feet lower in elevation 60 yards out.  To its west 80 yards, is our  food plot on the north end of Field #1.

One Night: This was a new stand in 2018 placed on the northwest corner of the 10 acre plantation described above under Oak Tree.  Besides covering the plantation to the south and east, it backs up to 8 year-old aspen regeneration. To its west lays Field #3 and a food plot out about 65 yards.

Steel Ladder Stands:  We utilize 6 of these. Ranging from 10-16 feet, three are semi enclosed with skirts.

Jim’s Ladder:  This was one of the first stands we put up years ago. Facing northwest it covers the southern portion of the plantation described in Oak Tree. It also covers the extreme lower portion of field #3 to the west. Behind it is a southern slope covered with mature oaks.

Pig Tail:  This is our only double wide ladder stand. At 10 feet high, it faces west and covers Lone Pine Trial, Pig Tail Road and a portion of South Main. Situated in an uneven-aged mixed hardwoods stand it covers the northern edge of a selectively cut south sloping of mature oaks.

Raegans Run: Named after my sons daughter, this stand is on the Raegans Run Trail. Located in a 30 year old heavy cover aspen stand, the topography to its east and west is gently rolling but to north and south is flat.  In January 2018, we clear cut a four acre inclusion of over-mature birch to its west.

Tri-Stand: Appropriately named as it sits 16 feet above but just off the intersection of three trails on the northern edge of the property, it is placed in a mature stand of mixed northern hardwoods. As a prime pinch point with a severe ravine to its east dropping almost 100 feet.  To the west another slopping hill transiting into more mature oaks. To the north, mature oaks, and to the south it skirts the northern edge of a 2018 selective cut.

Buck View Circle: At 14’ it is in the western sector of the property in a heavy mature oak and maple with rolling terrain. To its west it overlooks a one acre pond with a grassy edge and to the east you can cover a portion of Field # 3. North 70 yards out is the south leading edge of a 2010 aspen clear cut.

With 9 trail cameras we are provided with many pictures throughout the year. This obviously gives us a sense of deer and turkey quantity and quality and also which we think are going to be the “Hot” stands for that year. However, once the season starts, the deer always seem to show up where we don’t expect them.

What we have also experienced is that the type of stand hasn’t determined our success. Different years, different stands are more successful than others. Although, we have also found, typically it is not the stand, but the person in the stand that seems to make the difference. LOL.

One Night Platform- heated and enclosed 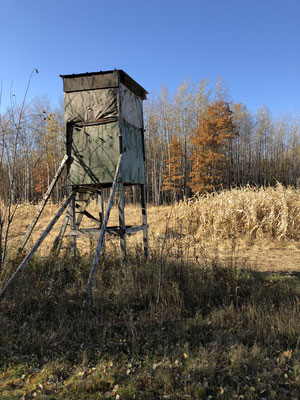 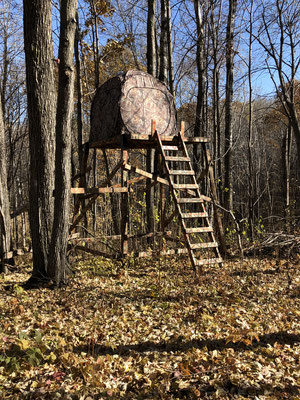 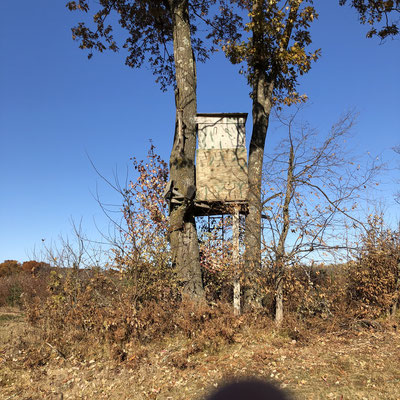 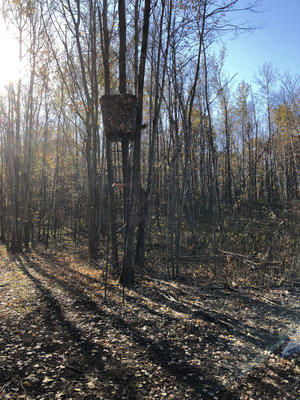 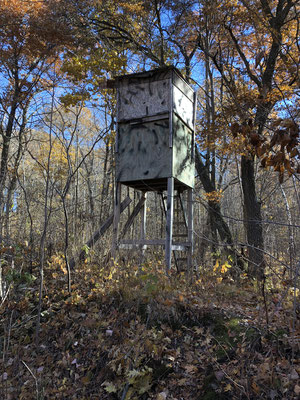 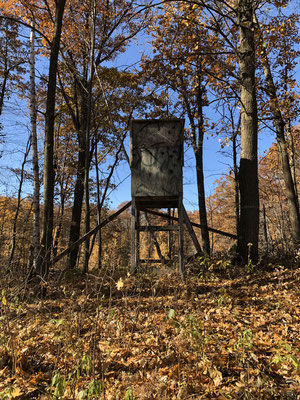 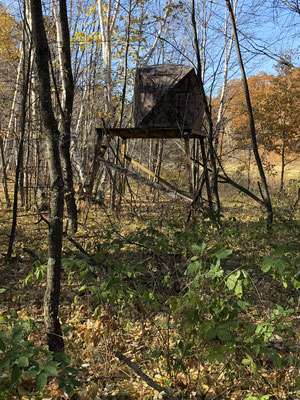 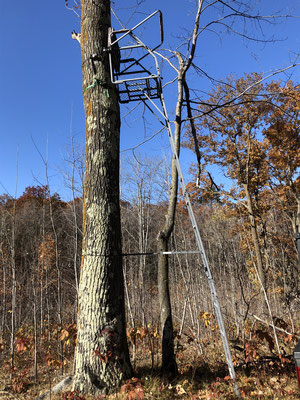 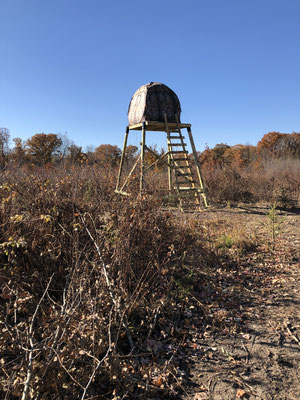 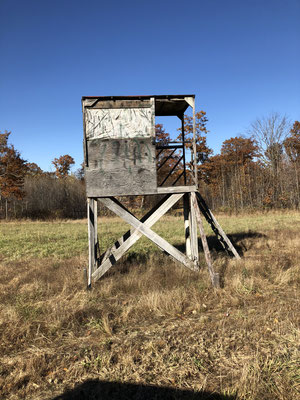 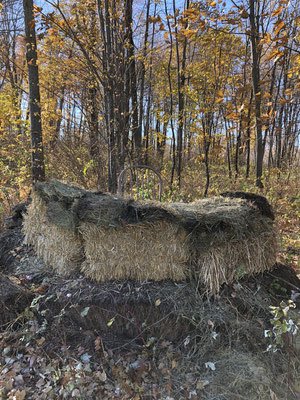 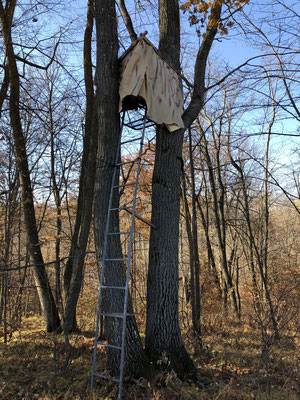 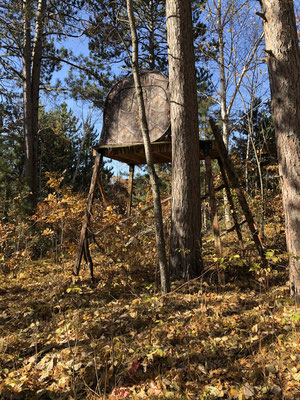 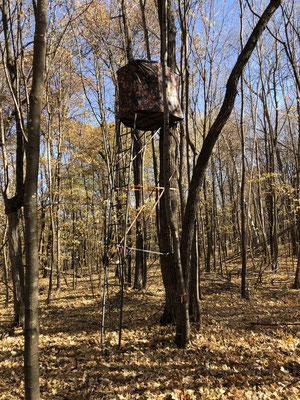 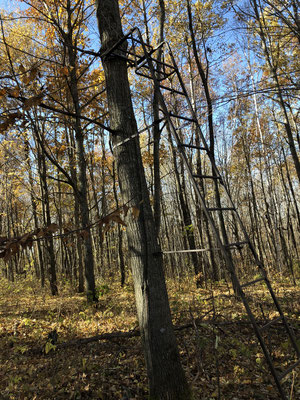 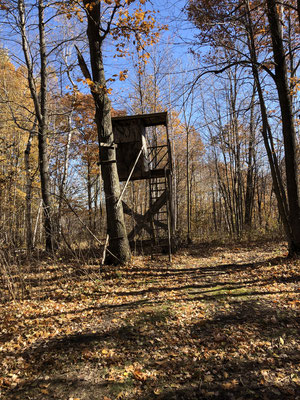